Ep 47: Are You Really Ready for Retirement?

Home 9 Podcast 9 Ep 47: Are You Really Ready for Retirement?

Just how ready are you for retirement? We explore some of the faulty thinking that leaves people underprepared when it comes time for retirement.

The Reality of the Matter:

Are you really ready for retirement? That’s what we want to help you determine. A lot of people cling to false beliefs about how secure their finances are heading into retirement. We want to make sure you don’t put yourself in a bad position when that big day arrives.

On this episode of the Retirement Reality Podcast, Mike Kojonen shares five beliefs that can wreck your retirement.

1. Believing a certain number is all you need to retire 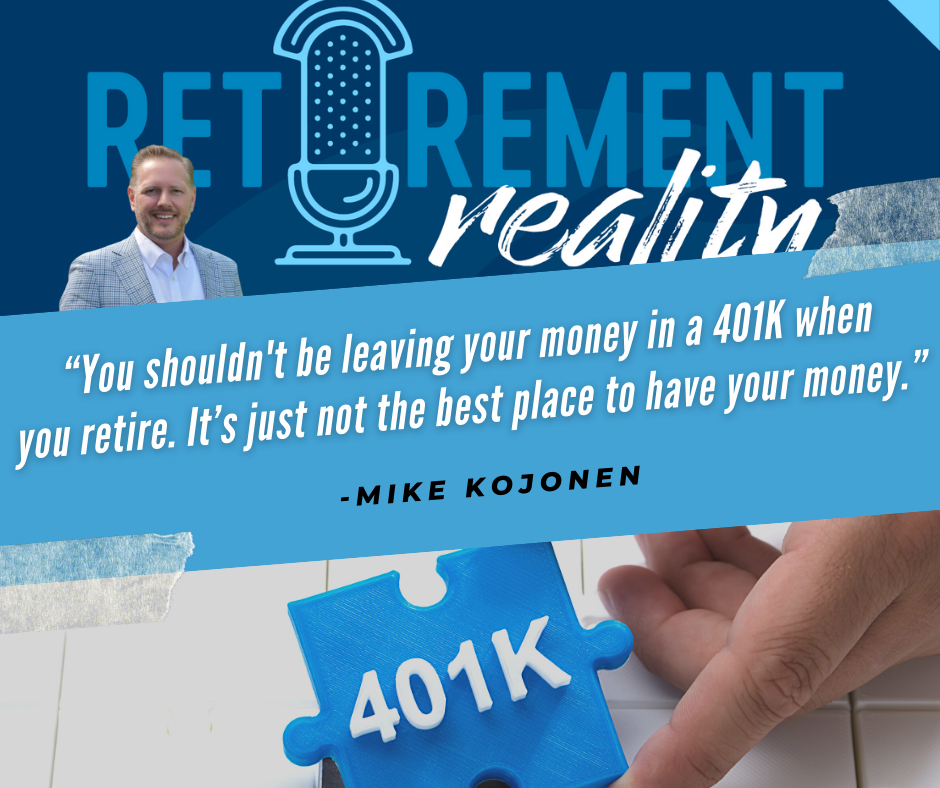 That’s not a good way to look at it because there are so many variables – how much you’ll travel, if your house is paid off, your health situation, etc.

“I see people that have $1 million that will run out of money by the time they’re 85, and I have some people who have half a million dollars, and they’re not going to even use up all their money,” Mike said. “So it all depends on what the number is for you … Don’t get stuck on a number. You really need to have a plan in place.”

2. Believing you won’t need as much money in retirement

Some people think they won’t need as much money in retirement, but that’s not always the case. You might be traveling more or spending more money on your grandkids.

If you really believe you can live on less money, do a dry run three months prior to retirement. Maybe you’re very disciplined, but not everyone is.

3. Expecting you’ll get an inheritance

So many people fail to save enough for retirement because they are counting on an inheritance from their parents or other family members. But that’s a bad plan.

Mike shares the story of a woman who watched her mother’s entire nest egg disappear due to a long-term health condition.

“You should tell your kids you don’t have anything to give them, and if they get it, that’s all bonus,” Mike said.

4. Thinking you’ll just figure it out

We’ve heard it so many times. People think if they don’t have enough money when they reach retirement, they’ll just keep working or find another job later. But beware of that thinking. Many people 65 and older have trouble finding jobs due to their age and say age discrimination, unfortunately, is real.

5. Believing the income estimate in your 401K statement or retirement accounts

“Those are really comical,” said Mike. “I’m not a big fan of those.”

The hypothetical rates of return are often unachievable and would require a lot of risky investing. Just read the fine print on those statements.

“You shouldn’t be leaving your money in a 401K when you retire. It’s just not the best place to have your money,” Mike said. “Nobody’s managing your money [and it’s] subject to very few investment options.”

We have much more advice in the episode, as well as viewer mailbag questions about real estate investment trusts and retiring at age 55. Listen to the full episode or use the timestamps below to find a specific segment.

2:41 – Believing a certain number is all you need

5:22 – Believing you won’t need as much money in retirement

7:34 – Expecting you’ll get an inheritance

11:40 – Believing the income estimate in your 401K statement or retirement accounts

Thanks for checking out the Retirement Reality Podcast. We’ll talk to you again next week.

Request Your Complimentary,
No Obligation Review